After a Vaulting display in Blantyre at St Andrews Primary School, the Malawi Vaulting Team was donated 8 footballs, by BP Malawi. With great excitement these footballs were distributed to the local school Namadidi FP School, which many of the children that we teach gratis, attend. We were also able to give a ball to some teams of children in the surrounding villages, along with the local farm adult team.

I was invited to the end of term ceremony and was shown with pride the trophies won by the Football and Netball teams. 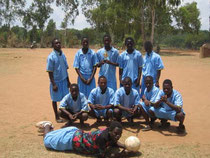 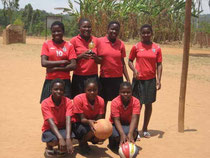 The children of Namadidi FP School are proud of the vaulting children who have competed in the FEI Inter Africa Cup in South Africa in March 2008. They are happy that because of the publicity the vaulting team have received, they have benefited by receiving balls, and in turn have made their school proud by being the winners of the trophies for both football and netball in their region.

Mbala Pony Club and Pegasus Vaulting, run by Tamsin Christie and Karen McGowan, try implementing the practice of fair play, and we asked the children for their ideas on this. These are some of the posters that Tamsin compiled from these drawings along with her own messages for the children, which are displayed at the above clubs functions, and will be eventually displayed in their training shelter. Tamsin has also taken them Malawi Equestrian Federation Shows.

We hope to enter teams in this years’ Inter Africa cup for Vaulting where the team spirit of the sport is an experience like no other. This sport has grown so rapidly in sub-Saharan Africa, initiated by Barbie Gertenbach of Riba Stables in South Africa, so that from 2 teams in 2006 onto 8 in 2007 to 23 teams from 5 different countries in 2008. This is a show where teams cheer each other on regardless of country, where children enjoy the privilege of being with horses at the same time as mixing with children from other countries of all ages and backgrounds. It is a lifetime experience. Pegasus Vaulters (funds permitting) very much look forward to joining in again this year and meeting up with old friends and making new ones.
Karen McGowan